In midtown Memphis, high vacancy rates had plagued the vacant Overton Square shopping and theater district for years. Nearby homes were inundated during storms due to inadequate flood control measures surrounding the area’s Lick Creek.

Then, in 2012, the city broke ground on a project that has already solved both problems simultaneously — an underground retention pond that doubled as the foundation for a new, $16.5 million parking garage that has already spurred millions in private investment in the area. Federal flood relief and stormwater funds were leveraged for the project.

“There should not be any such thing as a single-purpose public dollar,” said Memphis mayor A C Wharton Jr. as he described the project to an audience of 170 guests at the ULI Rose Center’s annual Mayors’ Forum on Public-Private Partnerships and City Building, held at the Urban Land Institute’s 2013 Fall Meeting in Chicago. “We’re not making maximum use of the cash coming through our cities … if you spend a dollar, it ought to build, it ought to teach, it ought to clean up. Any time you spend a dollar, make sure you get two or three returns on that same dollar.”

“For the first time in my life, we’re not trying to invest counter-market,” Rybak began. “Cities, by their nature, make sense. We’ll build things, such as transit, and [private developers] will build nearby … it’s where the public wants to be.”

Rybak stressed the importance of establishing connectivity between areas that are already thriving. Addressing audience member Mark O’Neall of Indianapolis, he lauded that city’s Cultural Trail as “the single piece of infrastructure that I envy the most” for its success at connecting the city’s cultural districts with bicycling and pedestrian infrastructure. “It’s not expensive. They simply took one of the worst things that’s happened in American cities — the ultra-wide street — [and] scrunched it all together.”

When moderator Shelley Poticha of the Natural Resources Defense Council prompted a discussion on evaluating private partners, Strickland encouraged public officials to have the courage to “know when to say no.”

“When you are starving for investment, that decision can look really bad — if you ask for high standards, you’re accused of being anti-business,” she continued.  “Sometimes I hear [from the private sector] ‘Let’s partner,’ but I have to ask, what exactly are you expecting? You can’t bring cheap beer to the party and expect to drink cognac. There has to be some mutual benefit here that is fair and makes sense.”

In a candid discussion that followed, the Rose Fellow mayors addressed some challenges of public-private cooperation for which there are no easy answers. Segarra criticized a de facto “segregated school system” resulting from the growth of charter schools in some parts of the country. Rybak agreed, to applause from the audience.

“The achievement gap is the single most important civil rights issue of our time,” he said. “We can do all the reminiscing about the civil rights movement of the 1960s we want, but if African American kids in the inner cities, Latino kids, American Indian kids are not getting the education they deserve … we have a crisis, and we ought to act like it.”

Fischer asked his fellow panelists what role the city can play in addressing the erosion of the middle class.

“Do we separate people — certainly adding to the problem — or do we create areas where people of multiple levels of wealth are living by each other? … Decisions we make about housing in our cities [will determine] the direction our country is going to go,” Fischer said. “Do we create a city where everyone can win, or is this a tale of two cities?”

Rybak expanded on these questions with an example from Minneapolis.

“Middle-class African American families in north Minneapolis have heard the giant sucking sound of their life savings being drained away as property values have fallen,” he said. “I would never say ‘Let’s gentrify north Minneapolis,’ but I do want housing values to come up because that’s the largest investment they have … [the challenges are] different in different places.” 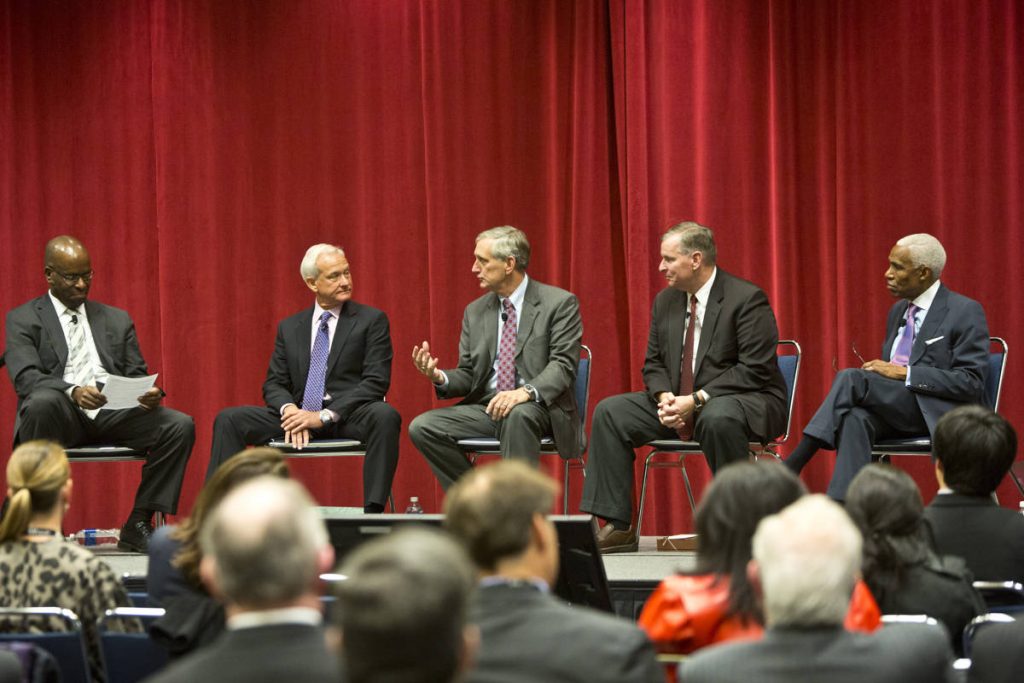 “In this improving real estate market, we shouldn’t be shy in asking [developers to meet] both design and social objectives. … We shouldn’t sell this resurgence short,” he declared.

Ballard agreed: “I have no problem with people trying to make a buck, but the city has to get something out of it,” he said.

Despite his state’s enviable 3.2% unemployment rate, Caldwell also called affordable housing a “huge challenge” in Honolulu, a 640 square-mile island where urban land competes fiercely with agricultural and recreational uses. The average home price has climbed above $650,000.

“How do we provide incentives, tax-increment financing, density bonuses, to get the right kind of projects being built?”

“In a city where you have a wide spread between the ‘haves’ and ‘have-nots’, every venture [with a corporate partner] is going to be viewed with a lot of jealousy and suspicion,” Wharton warned. “You can’t keep the buses running at night but you can give this guy ten million bucks?”

“You never want to go in and give the impression to the folks who are there, who have already planted a seed, they they’re not good enough, that we’re smarter than you. Get the logical stakeholders involved first before you bring in these new partners,” Wharton advised.

Hales shared what he called “the 127th and Mill test,” referencing a location on the city’s eastern edge that was annexed in the 1990s. “I imagine myself going door to door, to each of those four doors at the corner, and explaining a deal to them.”

“If I can at least imagine myself doing that,” Hales explained, “then it passes the test.”