An Inside Look at Economic Development in Japan

By Carlos Delgado
Posted December 17, 2018
In All News, Updates
An Inside Look at Economic Development in Japan2018-12-172019-02-17/wp-content/uploads/logo-dark.svgThe Rose Centerhttps://danielrosecenter.org/wp-content/uploads/inside-look-eed-japan-street.jpg200px200px
0

This year, a familiar face was selected to participate in the Japan Local Government Center’s Council of Local Authorities for International Relations (CLAIR) Fellowship Exchange program. Martha Brown, the deputy commissioner for the Department of City Development (DCD) of the city of Milwaukee, and former Equitable Economic Development (EED) Fellowship program participant, got to take her expertise across the globe.

The CLAIR Fellowship Exchange program offers senior state and local government officials from Canada and the United States an opportunity to experience Japanese government administration first-hand. Over the course of about 10 days, participants attend lectures, take part in workshops and visit local government offices. An additional and equally important part of the program is the homestay with a local family, an experience which immerses each visitor in the daily life and culture of Japan. This year, the fellowship program was held in Tokyo and Okayama Prefecture from October 28 to November 6, and there was a particular emphasis on the ways that the government supports small industrial businesses. 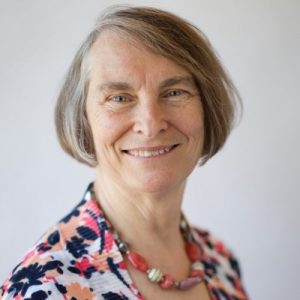 Martha Brown, the deputy commissioner for the Department of City Development (DCD) of the city of Milwaukee

Last week, I interviewed Martha about her experience in the program.

Carlos Delgado: Martha, I am very excited to learn that an EED Fellow was able to take advantage of this opportunity. Before discussing your professional and personal experiences, can you tell us who else was part of the visiting group?

Martha Brown: Thank you to Jim Brooks and NLC for nominating me. This was truly an unforgettable experience. Our nine-member delegation included seven from the U.S. and two from Canada – all of us either employed by, or providing support to, state, county or municipal government. The group included an executive in Toronto’s transportation department, a New Jersey State fiscal monitor, two elected officials, an assistant city manager, a city clerk, employees or board members in the International City/County Management Association, the Council of State Governments, the National Conference of State Legislatures, National Association of Counties and the Association of Municipal Managers, and clerks and treasurers from Ontario. I was proud to represent both the city of Milwaukee and the National League of Cities.

CD: This year the program included visits and meetings in Tokyo and Okayama Prefecture. Let’s start with the visit to Tokyo. Who did you meet? What did you learn from visiting? And what differences and similarities did you see between Tokyo and Milwaukee?

MB: You’ve likely guessed that the CLAIR seminar exposed participants to sides of Japan that aren’t featured on the itinerary of a casual tourist. We started the program in Tokyo – the world’s most populous metropolitan area, where we spent three nights with an orientation and two full days of programming. During our time in Tokyo we met Professor Shunsuke Kimura of Meiji University, who gave us a cram course in Japanese government structure. We learned that the functions of Japan’s three levels of government (central government, prefecture, municipal) are prescribed by national law. For example: There is a single, national zoning ordinance in Japan. Quite a difference from Milwaukee, where the 20+ communities in the metro area each have their own zoning rules. National law also provides ongoing financial support to local government.

Propelled by national policy that supports government units to merge to create efficiencies, the number of municipalities has dropped from 3,232 in 1999 to 1,727 today. That’s even more impressive when you learn there were more than 70,000 Japanese municipalities in 1880! Professor Kimura’s lectures laid the groundwork for meetings with Tokyo municipal officials, held in the city’s spectacular city hall, and discussions with national government representatives. We learned about strategies to promote tourism, increase foreign investment and support Japanese companies in their efforts to export and establish operations overseas. We repeatedly heard concerns about the “shrinking society,” the imbalance of old and young people that is projected to reduce the Japanese population from 128 million in 2010 to only 53 million by 2085.

Many of us questioned if loosening Japan’s tight immigration restrictions could grow the working- and child bearing-aged population. Prime Minister Shinzo Abe’s recent proposal to welcome significantly more guest workers into the country, well publicized during our visit, is seen as a small step in this direction. But we heard little support for broader change to immigration policy, at least for now. 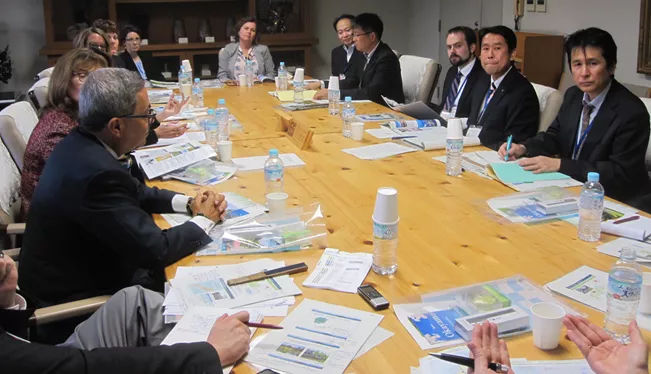 CD: This is very interesting, and as you pointed out, a declining population is a serious concern for Japanese officials. After those meetings in Tokyo, the group visited Okayama Prefecture. What was the visit like compared to Tokyo?

MB: As you mentioned Carlos, after all those meetings in Tokyo, our heads were filled with new facts and figures. We headed to Okayama Prefecture, “Land of Sunshine,” which is three and a half hours away by bullet train. We spent 6 full days in Okayama Prefecture. Okayama City (the prefecture capital) and environs illustrate how government structures support the growth of local business.

Our initial meetings with Okayama officials, including the prefecture’s charismatic Governor Ryuta Ibaragi, focused on industrial revitalization plans. The prefecture’s 100-year-old Industrial Technology Center provides research and development services and analytical and testing facilities for a wide variety of industries. At a stunning contemporary campus in the hills above Okayama City, 60 employees, half of them scientists with doctorate degrees, are working with companies to create new products like “wooden plastic,” a new material composed of recycled plastic and biomass generated by the lumber industry. Companies also can use state-of-the art equipment and specialized testing rooms (including a radio wave darkroom) to advance their own R&D work. 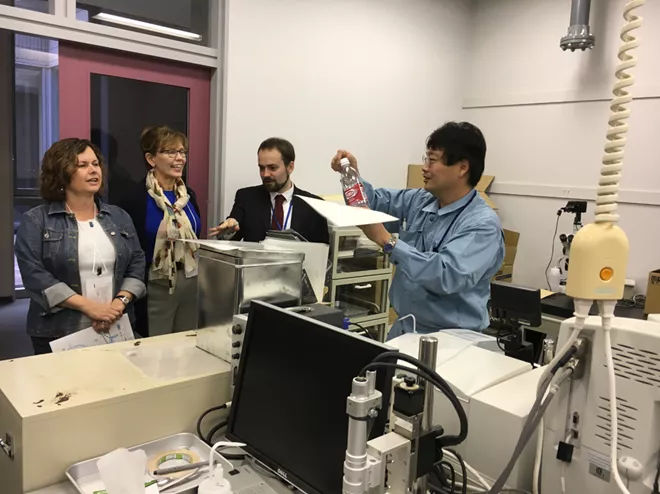 Visits to three small businesses introduced us to entrepreneurs who are shaping Okayama’s industrial revitalization. The 115 employees at Daiya Industrial Co., Ltd. design, manufacture and market orthotic support systems like ankle and elbow braces. Daiya focuses on innovation; its product line has expanded to include braces and back supports for ailing pets, and the factory complex features fitness facilities, a restaurant serving healthy food and a laboratory used to analyze the body mechanics of athletes.

The small city of Kojima, described as Japan’s “denim mecca,” is the home of Japan Blue Co., Ltd., which manufactures high-end blue jeans. The area, on the edge of Japan’s inland Seto Sea, once grew cotton, fueling the growth of the textile industry. Though cotton is now imported, denim fabrics are still woven and dyed in Kojima, and local firms produce 20 brands of jeans. Those companies have collaborated to create “Jeans Street,” a pedestrian street lined with up-market apparel stores.

CD: The visit to Okayama also included a home-stay experience, matching the attendees with local families for an overnight stay. How was that experience? Any language or cultural surprises?

MB: This was truly a unique experience for all of us. We all were so concerned about making a cultural misstep or encountering language barriers, that we felt anxious about this aspect of the CLAIR program. In fact, the home-stays proved to be a highlight of the Japan visit. Host families planned varied activities for their guests: bathing at hot springs, a Zen Buddhist meditation service, a chance to be dressed in a kimono, lunch at a conveyor-belt sushi restaurant, puppy-cuddling at a pet shelter, instruction in cooking the cabbage-filled pancake called okonomiyaki and many late-night conversations with new friends.

CD: This truly sounds like an amazing opportunity, not only to learn how local government works in Japan but also to learn about a new culture. Anything else you want to add about the CLAIR fellowship to encourage more people to consider this program for professional and personal development?

MB: Though I had visited Japan previously, the CLAIR experience allowed me to view Japan through a new lens, relevant to my professional interests. CLAIR’s meticulous planning and arrangements ensured that every part of the seminar contributed to our understanding of Japan. Even our limited sightseeing provided valuable historical and cultural context. The outstanding CLAIR staff members and interpreter who accompanied us were welcoming, knowledgeable and always available to respond to questions and take yet one more “commemorative photo.” Kudos and thanks to CLAIR for building an effective platform for local officials to meet their counterparts and get an inside view of how government works in Japan. 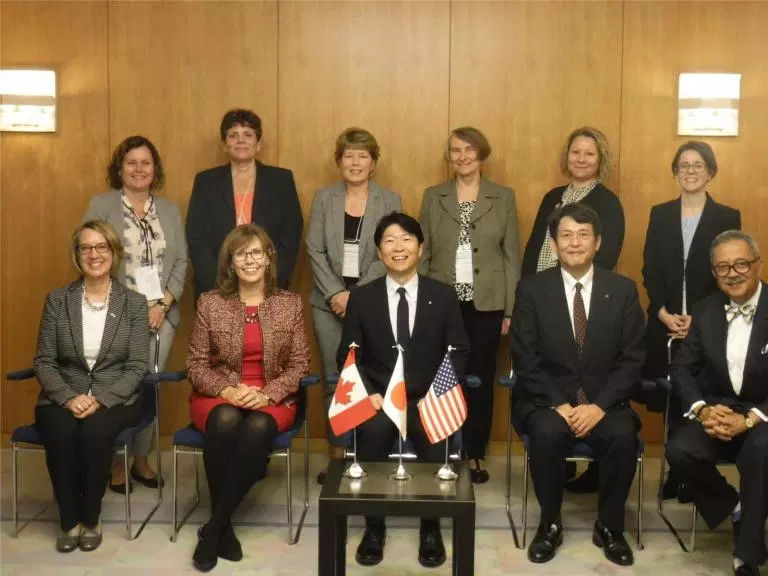