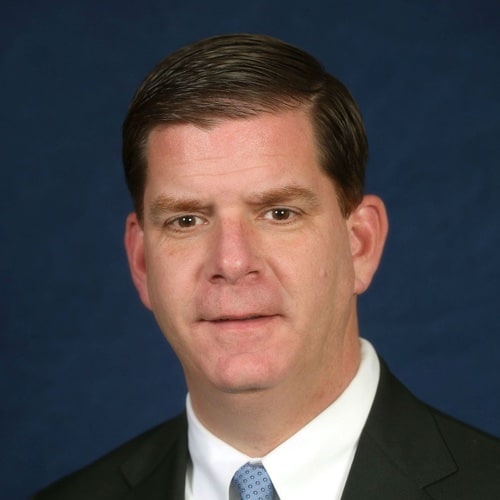 Mayor Martin J. Walsh, an accomplished advocate for working people and a proud product of the City of Boston, was sworn in as the City’s 54th Mayor on January 6, 2014.

In April 1997, at the age of 29, Walsh won election to the Massachusetts House of Representatives. During his 16 years in the House, Walsh established himself as a leader on creating and protecting jobs and growing the economy. He authored landmark public construction law reforms that increased flexibility and accountability, helped pass transit-oriented mixed-use “smart growth district” legislation, and was a strong supporter of infrastructure and zoning improvements. During the state fiscal crisis, he was a key broker in compromise legislation giving municipalities more tools to negotiate substantial savings on health insurance benefits while protecting the rights of hardworking people to receive the decent pay and benefits they have earned.

In the Legislature he also fought for annual funding for alternative schools and helped pass a law that allows the city to transform underperforming schools into pilot, magnet and in-district charter schools. A champion for civil rights, Walsh was a vocal early advocate for marriage equality, which he calls his proudest vote ever as a state lawmaker.

Rising up through the leadership of his Laborers Local 223 union, Walsh eventually served for two years, 2011 to 2013, as head of the Building and Construction Trades Council of the Metropolitan District, where he worked with business and community leaders and city officials to promote high quality development and new jobs for the city. In partnership with the Boston Housing Authority, he created Building Pathways, a pre-apprentice program connecting building trades jobs and opportunities with those traditionally underrepresented in the industry, mainly women and people of color.

At age seven, Walsh survived a bout of Burkett’s lymphoma, a form of childhood cancer, thanks in part to experimental treatments. He followed in his father’s footsteps to become a union laborer, working his first job at the age of 18 at Commonwealth Pier (now known as the World Trade Center) on the South Boston waterfront. He still lives in Dorchester, the neighborhood where he was raised, and is a graduate of Boston College.