Supporting Urban Manufacturing in Nashville’s Promise Zone. Nashville is a vibrant city at a critical moment. As a city with such rapid population growth, a diversified and booming economy, strong and changing neighborhoods, and significant international attention, Nashville faces the challenge of sustaining and expanding economic growth while also ensuring that all residents can benefit from that prosperity. On average, 70 people relocate to Nashville region every day.

While the City has experienced increased development, significant job growth, and low unemployment across the city-county, Nashville has also seen increased poverty and inequality, especially in specific neighborhoods and for communities of color. While many residents – especially residents of color – experience unemployment or underemployment, several of Nashville’s industries have current and/or projected workforce deficits. There is a distinct need for a skilled workforce to fill the jobs projected to come to Nashville. The manufacturing industry is one of four major economic engines of the region (along with Healthcare, Music, and Hospitality). In Davidson County over 20,000 people are employed in the sector and the manufacturers are not concentrated in one area. Entry level manufacturing jobs pay a higher wage than those of the hospitality industry and have a lower barrier to entry that those in the healthcare or music sector.

Several ongoing initiatives may present an opportunity to compliment efforts towards addressing the manufacturing sector’s workforce needs while also connecting low-income residents to jobs and financial empowerment. Last year, Nashville was named a HUD-designated “Promise Zone,” allowing the City to access preference points to leverage federal funding across a number of federal agencies to eliminate poverty in the targeted geographic area of the Zone, which encompasses many of the City’s high-poverty neighborhoods.

Through its participation in the EED Fellowship, Nashville is interested to develop a people-centered strategy for retention and growth of urban manufacturing jobs in the Promise Zone. Manufacturing is one of the region’s major industries; the sector is fragmented; and manufacturing jobs – coupled with financial empowerment – may be promising pathways out of poverty. According to the Nashville Area Chamber of Commerce, there are 84,300 manufacturing jobs in the region, and the sector has a $9.5B economic impact. The manufacturing sector is undergoing significant change both from a land use perspective and because of the disruption from technology. Since 2007, Nashville has seen 811 acres rezoned in the urban core from industrial/light industrial to another use. This loss of places and land for manufacturing has made it harder to attract new manufacturers within the urban core. Further, the distance between workers and location of businesses may negatively impact employee retention rates. 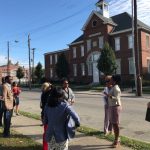 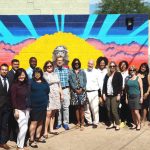