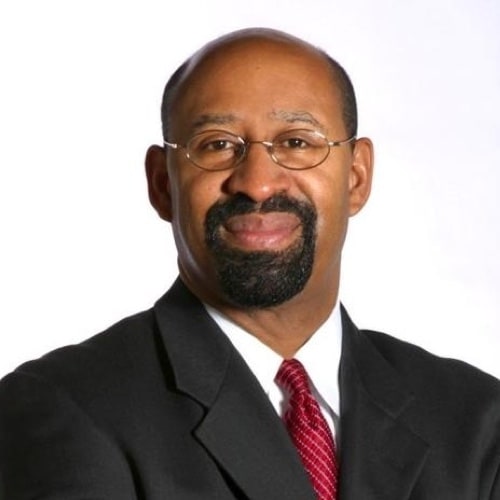 After serving almost 15 years in the Philadelphia City Council, he became the 98th mayor of Pennsylvania’s largest city in January 2008. At his inaugural address, Michael pledged to lower crime, improve educational attainment rates, make Philadelphia the greenest city in America, attract new businesses and residents to the city and, above all, to lead an ethical and transparent government focused on providing high-quality, efficient and effective customer service.

By the end of his tenure eight years later, homicides were down and high school graduations were up. The city added miles of bike lanes to its network of bicycle infrastructure. The city’s population grew each year he was in office. The City Council passed his Actual Value Initiative, the city’s first-ever property assessment system overhaul, transforming a broken and corrupt system into a fair, accurate and understandable one. And thanks to Michael’s strong financial stewardship, the city emerged from the worst economic recession since the Great Depression with its credit rating upgraded to the “A” category by the three major credit rating agencies—its best financial report card since the 1970s.

As the mayor of Philadelphia, Michael had high-value successes in the following areas: