In Detroit, Neighborhood Redevelopment Starts With “Trusting Your Gut”

By Jess Zimbabwe
Posted May 11, 2018
In All News, Updates
In Detroit, Neighborhood Redevelopment Starts With “Trusting Your Gut”2018-05-112018-07-01/wp-content/uploads/logo-dark.svgThe Rose Centerhttps://danielrosecenter.org/wp-content/uploads/blog-detroit-2018-update.jpg200px200px
0

Last Monday, the City of Detroit emerged from Chapter 9 Bankruptcy — nearly five years after it filed for the largest municipal bankruptcy in U.S. history. The June 2013 filing came at what was perhaps the nadir of the city’s spirits, battered by decades of population and jobs losses. A few months after the filing, the former mayor was sentenced to 28 years in federal prison for a corruption scandal so vast that prosecutors say it helped accelerate Detroit’s march toward bankruptcy.

New office buildings, hotels, events venues, restaurants, and housing developments are everywhere downtown, and some of the market’s power is also creeping into neighborhoods where real estate has had weak market value since the 1960s.

In 2010, the Rose Center invited Detroit to join its second cohort of Daniel Rose Fellows in Land Use. That programs fields a cohort of four cities each year for a program of leadership development and technical assistance. As a part of the fellowship, each city team chooses a land use challenge that they will focus on for the year. At that time, even before filing for bankruptcy, city government was woefully understaffed: The mayor’s office consisted of a skeletal team of only seven people.

Focused on stopping the bleeding of population, jobs and municipal resources, government was not able to take on proactive new projects and levels of trust in the community were abysmal. When they received the Rose Fellowship invitation, the Detroit team wasn’t sure if they were in a position to accept it.

Detroit eventually decided to accept the invitation, naming Mayor Dave Bing, Karla Henderson, Marja Winters Farrow, and Olga Stella as Rose Fellows. Farrow, was then deputy director of the Detroit Planning & Development Department, and is now vice president for strategic growth and partnerships at the Farrow Group. Henderson served as planning and facilities group executive in the Mayor’s Office in the Bing administration, and is now at Volte Strategy. Stella was in 2010 the vice president for business development at the Detroit Economic Growth Corporation (DEGC), and now leads Design Core Detroit.

Many in the city assumed the opportunity would bring additional resources to the Detroit Works Project, an all-hands-on-deck strategic planning effort that would improve the physical, social and economic landscape of the City. Bing, Henderson, Farrow, and Stella, however, saw a different option. Much of Detroit Works was focused on neighborhoods that were hardest-hit by vacancy and its attendant service and investment shortfalls. But the Detroit Rose Fellowship team realized that in addition to focusing on solving problem areas in the city, they also needed to look at creating and preserving “neighborhoods of choice.” 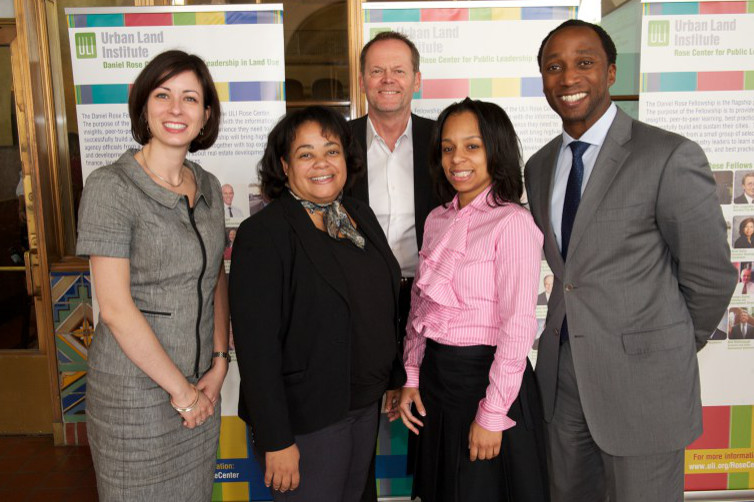 The team settled on the Livernois corridor as its focus area, a two-mile stretch once known as “The Avenue of Fashion.” Livernois was the primary commercial corridor for the neighborhoods of Green Acres, Palmer Woods, and the University District. These neighborhoods are full of stately, three-story brick Tudor homes, but the retail along Livernois was not generally serving those neighborhoods. Since Livernois had a great deal of vacancy and was dominated by auto body shops, discount retail, and stores with security grills and bullet-proof glass, the middle-class residents of the surrounding neighborhoods most often drove to the suburbs to eat out and shop. The City estimated $100 million of retail leakage annually from that area.

At its peak, Livernois’ Avenue of Fashion was a shopping destination for expensive clothes and accessories. While many small businesses remained on the corridor in 2010, Livernois was not a destination place for retail and restaurants. Livernois is home to the University of Detroit Mercy, a private commuter college with over 5,600 students and has a unique history of a high concentration of popular, long-standing African-American owned businesses. But by 2011, there were many vacant storefronts on the street. Scattered recent investments had been in suburban-style strip mall buildings that were auto-oriented and set back from the street. And a dilapidated public realm and private businesses that used security grates contributed to a sense that the strip had lost its luster.

In 2011, the Rose Center convened a national panel of experts to help advise the City of Detroit team on a redevelopment strategy for Livernois. The panel delivered strategic recommendations to the City in  areas:

I recently had a chance to catch up with the Detroit Rose Fellows and to visit the Livernois corridor to see what’s happened in the seven years since our panel’s visit. A number of new developments — including a resurgence of black-owned businesses — are bringing new energy to Livernois: Developer Matt Hessler has broken ground on an $8.3 million mixed-use redevelopment of the former B. Siegel Co. department store. Kuzzo’s Chicken and Waffles, Bucharest Grill, and the Narrow Way coffee shop have all opened.

Karla Henderson described the palpable energy on the street: “People sometimes wait an hour to get a table at Kuzzo’s!” Improved sidewalks, landscaping, and art — including murals funded by Artplace  — make it much more engaging to walk along Livernois. An annual Light Up Livernois festival attracts large crowds for art, fashion shows, music, and late night hours for Livernois businesses.

One of the first thing that the City did was to hire a Detroit Revitalization Fellow to work on redevelopment along Livernois. Michael Forsyth was a Revitalization Fellow with the Detroit Economic Growth Corporation (DECG), working under Olga Stella at the time, and he led an effort called Revolve Detroit to open a pop-up storefront on Livernois. Stella explains, “people were so tired of community engagement; we needed to do something. It’s a more widespread strategy now, but at the time, pop-up retail was pretty innovative.”

Marja Winters Farrow talked about the culture change that took place within city government following the 2011 Panel. With an aim of starting small, the City picked Livernois as a demonstration area under the Detroit Works strategic planning effort. Under that program’s auspices, they brought new services to residents there, including curbside recycling pickup. “It may have been a small thing, but it showed neighbors that the City was listening to them,” said Farrow.

Following on those early quick wins, the city undertook enhanced code enforcement, applied traditional main street overlay zoning to the corridor, built irrigation to the street median landscaping, secured matching funding for streetscape improvements, and began a major planning effort in the Fitzgerald neighborhood. The City and partners attracted other philanthropic investments like the $4 million Civic Commons project at Livernois and McNichols. “Those investments would never have happened without this early up-front work,” Stella said.

The City of Detroit’s Rose Fellows are quick to credit the many partners that it takes to accomplish this kind of redevelopment work. Everyone from individual merchants and residents to organizations like University Commons community development and its director Lolita Haley, the Live6 Alliance, and the Avenue of Fashion Business Association have taken on major roles in the area’s turnaround.

One local partner that has played a key role in redevelopment along Livernois is the University of Detroit Mercy. The Rose Center facilitated a 2011 meeting between Mayor Bing’s team and the then-new University President Antoine Garibaldi. Subsequently, the university’s Detroit Collaborative Design Center (DCDC) has played a major role in coordinating efforts between the city, neighborhood stakeholders, and the university. DCDC leads planning efforts in the Livernois and McNichols Public Realm Plan.

One of the challenges the Rose Center panel found in 2011 was that the university had tremendous physical barriers between its campus and Livernois Street. Originally meant to protect students, the high iron gates contributed to a weakened connection between the campus and community. Last year, the University dedicated a brand new gate opening at McNichols Road to improver connectivity. They are moving DCDC to a building outside of the campus. That meeting was crucial.

Everyone who works in or with city governments knows that one of the biggest risks to projects is the short-term nature of election cycles. 2013 marked the end of the Bing administration and the first election of Detroit’s current Mayor, Mike Duggan. Everyone who I spoke to about new developments along Livernois reiterated that the Duggan administration has really stayed the course in neighborhood efforts. Maurice Cox, who leads the city’s urban planning department under Duggan, is widely known for developing things in a way that’s mindful of community input, and many cited his department’s work around Livernois as being critical.

The story of Livernois’ transformation took lots of people making lots of attempts at lots of strategies to get anything accomplished. Redevelopment was slower than everyone would have liked, partly due to lack of staffing and resources, but also partly because this kind of multi-sector work takes time because it requires deeply trusting relationships among partners, and the city had a real trust deficit going into this work.

There is immeasurable perseverance among the neighborhood residents who lived there through decades of decline, and of business owners who struggled for years with insufficient city services. They stayed the course until a team of battle-wounded but visionary city officials and their nonprofit and university partners could start to catalyze change.

And even still, years later, everyone acknowledges that there is much to be done to bring Livernois not simply back to what it was when it was the Avenue of Fashion, but beyond that, into a neighborhood corridor that brings the entire community together. The story of how far Livernois has come and how many partners it took should be a sobering but hopeful story for any community charting its own course through the muddy waters of urban revitalization.

As Karla Henderson described the City of Detroit’s strategy on Livernois, ”trust your gut, take the hits that come at you, and get it done.”