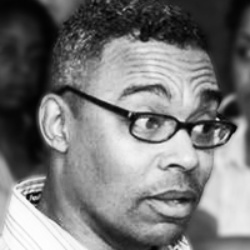 Charles Cross, ASLA, is the Director of Landscape Architecture at the Detroit Collaborative Design Center; as well as an Adjunct Professor at the University of Detroit Mercy School of Architecture. He also serves as the Faculty Advisor to the National Organization of Minority Architecture Students.

With a deep commitment to public Interest design, Cross maintains a firm belief that underserved communities deserve good design and therefore should be the patrons of a collaborative process, not just the consumers of the end product. His past experience in the public sector includes the US Department of Agriculture Natural Resource and Conservation Service and the State of Michigan Department of Natural Resources. He has worked in the private sector for SmithGroup-JJR (Johnson Johnson and Roy), Elizabeth Kennedy Landscape Architects and Artist Mary Miss.

Recently, Cross completed work on the Detroit Future City Strategic Framework Plan and is currently working on several park projects that will act as catalysts for renewed investment in three Detroit neighborhoods. He also has conducted research on cultural assets as they relate to the Detroit River and its role in the Underground Railroad. Last November, Cross completed work as a panelist for the National Endowment for the Arts. He has been an invited guest critic at Columbia University, City College of New York, The Cooper Hewitt National Design Museum, Lawrence Technological University, Michigan State University, University of Michigan and Illinois Institute of Technology.