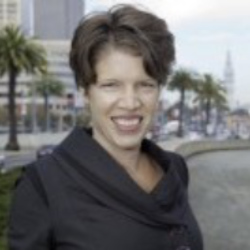 Portland: 2016 Land Use – Other Technical Assistance

Kate Sofis’ experience integrates a rich background in entrepreneurship and innovation, manufacturing, and urban economic development. Kate currently serves as Founding Executive Director of SFMade. A public-private partnership launched in 2010 and already viewed as a new national model, SFMade has helped catalyze a resurgence in local manufacturing in one of the land-constrained and expensive cities in the US. SFMade’s innovative programs—which help manufacturers to access expertise and education, capital, workforce, and real estate—currently support more than 500 San Francisco—based manufacturers, employing close to 5000 people, over 65% of whom are low-income residents. In 2014, under Kate’s leadership, SFMade launched the West Coast’s first non­profit affordable industrial development corporation—PlaceMade, of which Kate serves as President. Prior to SFMade, Kate held senior positions at Pacific Community Ventures, ICF Consulting, and in Ernst and Young’s West Coast manufacturing practice. She has also held operating roles at manufacturers, spanning computer and medical devices, ceramic tile, furniture, and green building product manufacturing.

Kate currently serves as a Mayoral Appointee to the Eastern Neighborhoods Citizens Advisory Committee in San Francisco, has participated as an invited member of the Clinton Global Initiative on the US Economy since its inception in 2011, and is an appointee to the Special Commission on Manufacturing at the Miller Center in Washington D.C. Kate speaks widely on the topic of manufacturing, urban economic development, and the intersection of cities, jobs, and the maker movement. Most recently, she has been a featured speaker at SxSW, CityLab/Aspen Institute, the Initiative for Inner City Competitiveness, Techonomy, and the US Conference of Mayors. Kate has been published in Forbes, the Atlantic, the New York Times, the Wall Street Journal, and Monocle Magazine as well as numerous local publications.

Kate holds an M.S. in City Design and Social Policy from the London School of Economics and an A.B. in Economics from Harvard University.