The Re-Emergence of Neighborhoods

For the past five years, NLC’s Center for City Solutions has analyzed hundreds of mayors’ state of the city addresses. In this research, we examine which priorities mayors are focusing on and how their priorities change over time in response to social, economic and political trends. The 2018 State of Cities (SOTC) report covers a sample of 160 mayoral speeches delivered between January and April 2018. This year, the subject of neighborhood revitalization (and sometimes initial vitalization) emerged as one of the top subjects for mayors address, under the broad category of economic development.

A few weeks ago in this series, my colleague Gideon Berger wrote about how mayors covered the subject of downtown development in this year’s state of the city addresses. Several factors drive mayors to focus on the city’s central business district: the importance of the commercial tax base to the city’s finances, the central role of downtowns in shaping a city’s image and the increasing number of people who actually live in the central city, turning downtown into a neighborhood of its own. Mayors covered the subject of downtown development slightly more often than they discussed neighborhoods, and they spent more minutes of their state of the city remarks on downtown, reflecting how critical downtown remains to the future of our cities.

But anyone who has experienced a mayoral election in an American city knows that—especially during campaign season – mayoral candidates often focus more on neighborhoods than on downtown. In the black-and-white lighting of campaign season, this dichotomy seems like a sharp either/or: are you with us out in the community, or are you in the pocket of downtown interests? Uniquely, mayors and other local elected officials must represent both the needs of downtown and neighborhoods.

“I am so committed to this goal of strengthening our neighborhoods, that I am creating a brand-new position that will focus on the unique needs of neighborhoods. The Director of Neighborhood Engagement will ensure that my administration remembers that there is no “one-size-fits-all approach.”

But this year, 26 percent of addresses spoke at some length about bringing vitality to neighborhoods, up from 17 percent in 2016. One analysis of Los Angeles Mayor Garcetti’s 2018 state of the city address shows that he used the word “neighborhood” 25 times. 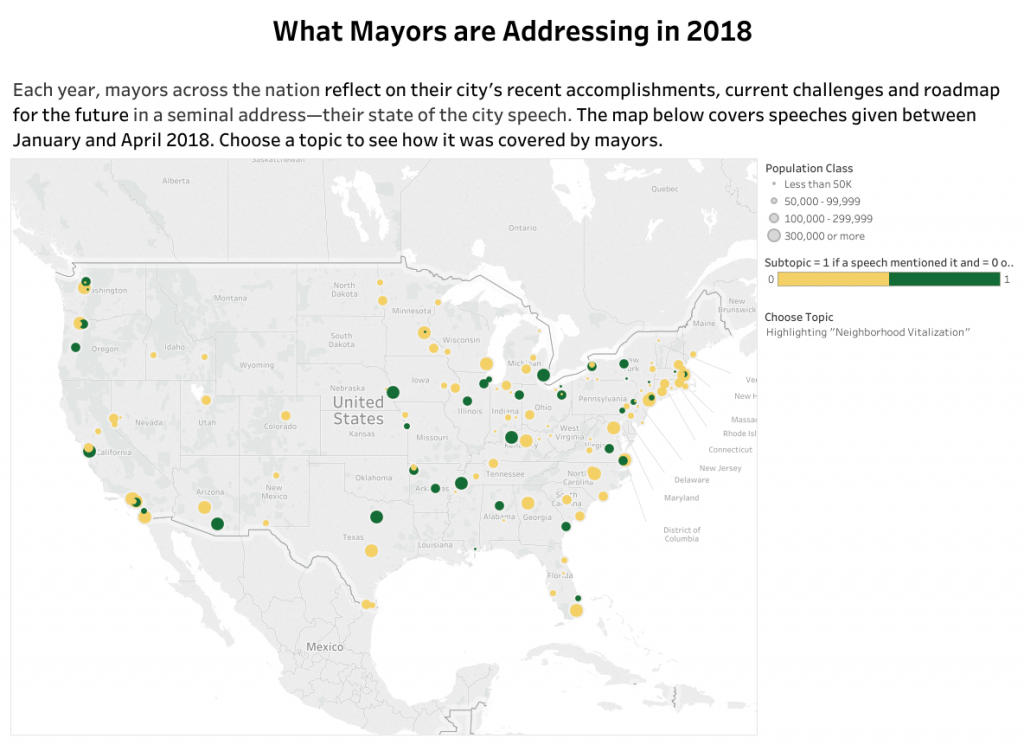 Beyond the hyperbole of the well-worn “downtown v. neighborhoods” debate lies a much more serious conversation about the future of equality in cites: how much downtown prosperity can be spread to other neighborhoods? In the context of a strong national real estate economy, the injection of capital into even moderate- and low-income neighborhoods creates opportunities but also challenges that mayors are called to address.

New development attracts new residents. In many neighborhoods — especially those that have not seen private development or deep public investment in decades —newcomers are more affluent than existing residents (or at least better positioned for upward economic mobility).

Given the relationship between race and class in the United States, new development and new residents coming to a neighborhood usually — but not always — means wealthier white people move into communities that, primarily, people of color have called home. This year’s state of the city addresses show that many mayors are addressing neighborhood equity head-on.

“More than 100 years ago, the City Beautiful Movement and ushered in a new era of parks, infrastructure and architecture that we continue to benefit from. Today, we are launching a new movement – an equity movement – that is about extending economic opportunity to all people, strengthening our neighborhoods, and preserving our history, culture and sense of community.”

A number of mayors used their 2018 state of the city addresses to articulate this renewed focus on bringing equitable development to neighborhoods in the midst of their cities’ broader successes:

Mayors who participate in NLC’s Daniel Rose Fellowship have often raised similar questions and themes. For the past nine years, the Rose Fellowship has provided technical assistance to large U.S. cities nationwide who wish to find a more economical and sustainable approach to development. For the first few years of the program, participating cities and mayors were largely looking to harness the real estate market that was emerging following the recession of 2007-2009.

But in the past few years, the program has seen more mayors asking questions about how development might re-shape neighborhoods that have not seen much market rate activity for decades. Mayors are increasingly worried about possible deleterious effects of both public and private, as seen in both the Rose Fellowship projects and in this year’s emphasis on neighborhood development in the State of the Cities analysis.

Over the past nine years, the Rose Fellowship has shared and learned a number of lessons about how downtown and overall citywide development can be harnessed to create equitable development in other neighborhoods, and Rose Fellow mayors have similar goals to the mayors highlighted in our State of the Cities report. A few examples include:

Since mayors run for office in the whole city, they understand perhaps more than anyone how the nuances of the neighborhoods result in priorities that differ from place to place. With the increased attention to drawing investment to neighborhoods — and to making sure that prosperity is broadly shared — the 2018 state of the city addresses show this topic will be ripe for future work, research, investments and conversation. The old math that a win for downtown was a loss for the neighborhoods simply doesn’t add up anymore, and cities will need to work with neighborhood residents to develop inclusive paths forward.